Although now retired, Susie worked as a behavioural scientist and management consultant. In this capacity she established a consultancy working with a variety of groups and large institutions such as the Commonwealth Bank, Qantas and Westpac Bank, implementing her new ‘Lifestyle for Success’ program.

She has written a book Super Working which was the result of her experiences conducting workshops for government, business institutions, schools and other organisations both in Australia and overseas. She is still involved in groups such as Australian Ethical Investments and a number of environmental causes. 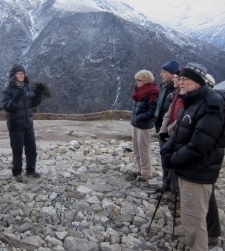 Susie has family in Nepal and is involved in conducting treks there which emphasise cultural exchange. Members of The Heathens recently participated in a singing trek to Nepal led by our choir director – Christine Wheeler.

Moving to the mountains was something Susie had thought about for a while. She moved to Wentworth Falls from Mosman in Sydney, in May 2012. The sense of community and a different attitude to possessions and appearance are attributes which attracted her. “In Mosman when people look at you they look from your shoes to your handbag but here there is more acceptance” she says. “I feel that it is an absolute privilege to live here”.

Susie sings with the sopranos – the choir has not only been a way into the community but it makes Susie feel “Uplifted. If you miss a note the choir still keeps singing”.